skip to main | skip to sidebar

To pixel or not to pixel “The world breaks everyone and many grow stronger at the break“;. I think that’s Hemingway I got it from the movie Croupier. Technology breaks as well but in a different way the old replaces the new’ dose the old grow stronger. With new technology new things arrive old ones take on new meanings . There are three ways that I can think of to take a photograph Digitally, Traditionally, and Alternatively. First I will define my usage of the words .
Digitally would be taken with a digital camera, no film just a light sensitive chip. I know some people who would not call this process photography due to the lack of film they would call this digital imaging I‘ll get back to that point later . Traditionally this would be your good old film be it black and white or colour; positive or negative . And lastly Alternatively which basically to me encompasses all the other processes that precede the plastic based film of today.
So as a photographer one has many options as how they want to work; .It’s a good time to be a photographer in my opinion . Working digitally (well Ill just be honest and come out and say it I have yet to make any money non digitally since the change over) is great for assignments and event shooting digital is great for shooting in different types of light , used to be you would have to pick the film for the situation with digital you can shoot for any situation that may come up and I’ve yet to run out of memory but used to run out of film. Digital is great but well to be blunt it doesn’t get me off like shooting film. For my own work (the stuff that doesn’t seem to pay in $ anyway) I chose to work with film and not only with film but big old heavy clunky cameras shooting one sheet of film at a time, no rolls of 36 for me. Sometimes I even use old printing processes; sometime the original image for what is now called alternative process is digital in origin .
So one can work photographically in many different ways so why is it and I will draw from real life that people can’t seem to accept either the change in the medium or the desire to work with the older technologies . Most of the photographers I know use both . Every so often though I get into the debate of is digital still photography or is it something new my answer to that is if it isn’t photography then we would all be doing either daguerreotypes or calotypes the media changes like all medias have changed . This brings me to my second point if you choose to work with film you shouldn’t be looked down on for doing so. An example a guy I know was walking through D.C. near the Corcoran with his camera. He shoots with an older view camera like myself. Some of the photo students yelled at him to get into the 21st century . I don’t get it why discredit one way over another why limit yourself, find what works for you and pwn it.
Posted by William at 11:26 AM No comments: 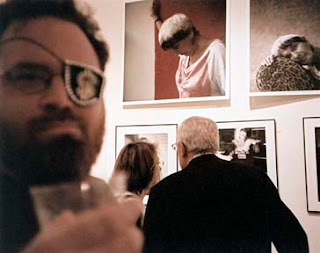 A girl I knew in high school told me stories of her aunt taking her to the art museums when she was little. Her aunt would make her go up to the work and ask aloud “But is it Art?“
What is art? That is the question. Art is everything and art is nothing; I don’t know if anyone has said that before sounds deep though. Now that I have made such a statement of specificity lets take a more semiotic approach. Webster’s dictionary defines art as 1. Human creativity 2.skill 3. Any specific skill or it’s application 4.any craft or profession, or it’s principles 5 the making or doing of things that have form and beauty; creative work. I should mention that my dictionary is from 1978 and not much help in clearing up this question of what art is. Lets take definition number 1 on human creativity that’s another very specific idea; human creativity that’s given us a lot of things including reality television and those little dogs whose heads bob up and down as your driving. Not to say I don’t find enjoyment in either of those things but is it art. Definition 5 implies that to be art something must be beautiful and I agree that a lot of art is beautiful but then again a lot of it isn’t or is it?
We’re not really getting a clearer idea of what art is just more questions; so lets see, I have a friend who is a sculptor; now here we go a sculptor one who makes sculpture so he must be an artist therefore what he does must be art. He even gets paid for his work as a sculptor; he sculpts cars for one of the big three in Detroit. So cars are art then, there are many beautiful cars in the world the 1969 Ferrari 250 Gt California comes to mind, it is so choice, a 1983 Honda civic wagon not so choice. So we’re back to a personal taste, ok I know few people I hope would chose the Honda over the Ferrari given the choice. There are also people who only consider a car as something to get you from one place to another; is art then what we personally find attractive or stimulating to our senses and emotions? Maybe that is what it all comes down to art is what we like; although I have another friend who likes movies but not films, I take his definition of a film to be a more artful movie. Guess that ruins the art is what we like theory. What I do know is that I was once told by one of my teachers that good art should ask questions not give answers.
Posted by William at 4:16 AM 1 comment:

William
This is the blog of the aforementioned photographer William Atkins.